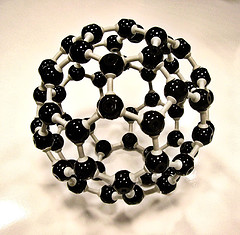 Nanotechnology is science, engineering, and technology conducted at the nanoscale, which is about 1 to 100 nanometers. (nano.gov) Developments in this area started after invention of scanning tunneling microscope in 1981, concept of manipulating matter at nanoscale were developed earlier. Most people cite Feynman’s talk as a starting point, but there are objections.

Mihail C. Roco from Scientific American argued that nanotechnology will have four stages:

(Kaewkamnerdpong et al. 2007) discuss Roco’s timeline and argue that computer science will be important in third and fourth stages:

To date, nanotechnology has been developed mostly from the basis in physics, chemistry, material science and biology. As nanotechnology is a truly multidisciplinary field, the cooperation between researchers in all related areas is crucial to the success of nanotechnology. Until now, computer science has taken a role mostly in research tools, for example: a virtual-reality system coupled to scanning probe devices in nanomanipulator project. However, according to M.C. Roco, the third and fourth generation of nanotechnology would rely heavily on research in computer science.

If you read the article you will notice that there is a reference to OR research topics: swarm intelligence, ant colony optimization, particle swarm optimization, evolutionary algorithms.

I hope interest of OR community will continue. How do you think OR can help to achieve the goal of systematic control of matter at nanoscale?

PS: If you are interested there is Nanomanufacturing summit (September 4-6 2012)