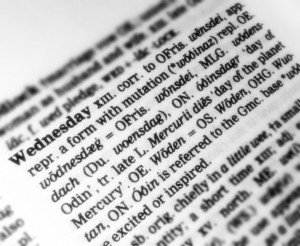 We communicate with words. Each word has its own history, also each word triggers different concepts in everybody’s mind. But we are not fully aware of this. For an example you can watch this part of Douglas Hofstadter’s talk.

In this post I will list some popular IE/OR terms. It is interesting to see the change in the meaning of the words. Please feel free to suggest words.

I started with oldest words, highlighted the year when the word got relevant from IE/OR meaning. My source is Online Etymological Dictionary.

cost (n.) c.1200, from Old French cost (12c., Modern French coût) “cost, outlay, expenditure; hardship, trouble,” from Vulgar Latin *costare, from Latin constare, lit. “to stand at” (or with), with a wide range of figurative senses including “to cost.” The idiom is the same one used in Modern English when someone says something “stands at X dollars” to mean it sells for X dollars. The Latin word is from com- “with” (see com-) + stare “to stand,” from PIE root *sta- “to stand” (see stet).

production (n.) c.1400, “a coming into being;” from Old French production (13c.), from Medieval Latin productionem (nom. productio), from pp. stem of Latin producere “bring forth” (see produce). Meaning “that which is produced” is mid-15c.

process (n.) early 14c., “fact of being carried on” (e.g. in process), from Old French proces “journey” (13c.), from Latin processus “process, advance, progress,” from pp. stem ofprocedere “go forward” (see proceed). Meaning “course or method of action” is from mid-14c.; sense of “continuous series of actions meant to accomplish some result” (the main modern sense) is from 1620s. Legal sense of “course of action of a suit at law” is attested from early 14c.

system (n.) 1610s, “the whole creation, the universe,” from Late Latin systema “an arrangement, system,” from Greek systema “organized whole, body,” from syn- “together” (seesyn-) + root of histanai “cause to stand” from PIE root *sta- “to stand” (see stet). Meaning “set of correlated principles, facts, ideas, etc.” first recorded 1630s. Meaning “animal body as an organized whole, sum of the vital processes in an organism” is recorded from 1680s; hence figurative phrase to get (something) out of one’s system (1900). Computer sense of “group of related programs” is recorded from 1963. All systems go (1962) is from U.S. space program.

plan (n.) 1670s as a technical term in perspective drawing; 1706 as “drawing, sketch, or diagram of any object,” from French plan “ground plan, map,” lit. “plane surface” (mid-16c.), from Latin planum “level or flat surface,” noun use of adjective planus “level, flat” (see plane (n.1)). The notion is of “a drawing on a flat surface.” Meaning “scheme of action, design” is first recorded 1706, possibly influenced by French planter “to plant,” from Italian planta “ground plan.”

probability (n.) mid-15c., “quality of being probable,” from Old French probabilite (14c.) and directly from Latin probabilitatem (nom. probabilitas), from probabilis (see probable). Meaning “something likely to be true” is from 1570s; mathematical sense is from 1718.

operation (n.) late 14c., “action, performance, work,” also “the performance of some science or art,” from Old French operacion “operation, working, proceedings,” from Latinoperationem (nom. operatio) “a working, operation,” from pp. stem of operari “to work, labor” (in Late Latin “to have effect, be active, cause”), from opera “work, effort,” related to opus (genitive operis) “a work” (see opus). The surgical sense is first attested 1590s. Military sense of “series of movements and acts” is from 1749.

industrial (adj.) 1774, from French industriel, from Medieval Latin industrialis, from Latin industria (see industry). Earlier the word had been used in English in a sense “resulting from labor” (1580s); the modern use is considered a reborrowing. Meaning “suitable for industrial use” is from 1904. As a style of dance music, attested from 1988.Industrial revolution was in use by 1840 to refer to recent developments and changes in England and elsewhere.

network (n.) “net-like arrangement of threads, wires, etc.,” 1550s, from net (n.) + work (n.). Extended sense of “any complex, interlocking system” is from 1839 (originally in reference to transport by rivers, canals, and railways). Meaning “broadcasting system of multiple transmitters” is from 1914; sense of “interconnected group of people” is from 1947.

optimize (v.) 1844, “to act as an optimist,” back formation from optimist. Meaning “to make the most of” is first recorded 1857. Related: Optimized; optimizing.

efficiency (n.) 1590s, “power to accomplish something,” from Latin efficientia (from efficientem; see efficient) + -cy. In mechanics, “ratio of useful work done to energy expended,” from 1858. Attested from 1952 as short for efficiency apartment (itself from 1930).

The notion is of slips of paper attached to a document as an appendix (a sense maintained in U.S. tax forms). The specific meaning “printed timetable” is first recorded 1863 in railway use (the verb in this sense is from 1862). Modern spelling is 15c., in imitation of Latin; the modern British pronunciation (“shed-yul”) is from French influence, while the U.S. pronunciation (“sked-yul”) is from the practice of Webster, and is based on the Greek original.

stochastic (adj.) 1660s, “pertaining to conjecture,” from Greek stokhastikos “able to guess, conjecturing,” from stokhazesthai “guess,” from stokhos “a guess, aim, target, mark,” lit. “pointed stick set up for archers to shoot at” (see sting). The sense of “randomly determined” is first recorded 1934, from German stochastik.

General sense of “a definite plan or scheme” is recorded from 1837. Meaning “list of pieces at a concert, playbill” first recorded 1805 and retains the original sense. That of “objects or events suggested by music” is from 1854. Sense of “broadcasting presentation” is from 1923. Computer sense (noun and verb) is from 1945. Spelling programme, sometimes preferred in Britain, is from French and began to be used early 19c.

simulate (v.) 1620s (implied in simulated), from Latin simulatus, pp. of simulare (see simulation). First record of simulated in sense of “imitative for purposes of experiment or training” is from 1966 (simulation in this sense dates from 1954).