OR and the Matrix 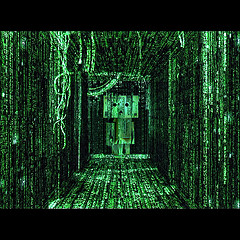 Well, as a Matrix fan, I thought if we are really in ‘the Matrix’ then there could be some changes in Operations Research. I would like to start with the question ‘What is the Matrix?’ for those who don’t know the concept yet.

Matrix is a science-fiction, dystopia film written, produced and directed by The Wachowski Brothers. The story goes in future where people are controlled by sentient machines and connected to a complex computer system through their nerves. To be clear, people are living in a virtual/simulated world, which is controlled by machines. Everything is unreal in this world. The world, which people thought that they are living in, is a virtual reality created by machines to keep people in the system. And ‘Matrix’ is the name of the system, which some people fight against to save humanity from the imprison of the machines.

So why the machines want to keep people in the Matrix in the first place? It’s because, there was a war between humanity and machines, at some point people tried to unplug machines by cutting their power in some sense. Then the sentient machines found a way of extracting energy from people by growing them in pods and let them live in a virtual simulation. My explanations are not so clear for people who didn’t watch the movie, so best way is watching the movies (The Matrix, The Matrix Reloaded, The Matrix Revolutions) twice. There is a website for those interested with the concept.

How about the Operations Research? Wait, I am almost there. Since the known world is a virtual reality created (and controlled) by the machines, there could be some problems (bugs) and missing parts. There is a program called “The Architect” which is responsible of reloading/constructing the Matrix. In the movie, The Architect stated that it is the 6th iteration of Matrix. In each iteration of the Matrix some problems, rejections and unstable points are resolved.

What if we are living in the Matrix? Assume that you are in the Matrix. Do you want to leave Matrix (this world) whenever you learn the truth. In the movie, Morpheus said that

The Matrix is a system, Neo. That system is our enemy. But when you’re inside, you look around, what do you see? Businessmen, teachers, lawyers, carpenters. The very minds of the people we are trying to save. But until we do, these people are still a part of that system and that makes them our enemy. You have to understand, most of these people are not ready to be unplugged. And many of them are so inured, so hopelessly dependent on the system, that they will fight to protect it.

As we are sure that some people will want to stay in Matrix even if they learn that it’s a simulation. It is because their life will definitely change and they will lose whatever they have when they leave the system instead of still benefit from it. However, if one founds a way to learn the very nature of the Matrix (or the Nature if this world is real) then some of our problems could be easily solved. In the following website, author states;

In other words, the Architect deliberately designs holes into the system which can be abused to actually escape the Matrix. Any human who comes to the realization that something is wrong, can be given the true choice of escaping, the true choice of rebelling against the system, to “take the red pill”. So there could be some ways to escape from this world if we are living in the Matrix. (Assuming we have also an architect.) As I stated above, understanding the Matrix may help us to solve some problems exist in the world. For example, if machines are smart enough to create such a perfect world (simulation), then we can be sure that all of the outcomes could be found in the codes. A problem which could take exponential time when instances increases could be solved in polynomial time since the outcomes are already coded and there is no slowdown in the Matrix(1). If my assumption (1) is wrong then there should be a way to accelerate time which makes exponential time growing insignificant (2). So either (1) or (2) is true, all problems could be solved in a short time.

Since I believe answers of the all problems lie in nature, then same for Matrix, all problems can be solved in polynomial time since Matrix is created by machines and they have already figured it out how to do that.

If someone proves that we are in Matrix, then he also could prove P=NP and get his million dollar prize, but I am not sure what he could do with the prize in the Matrix. What would you do? Taking the prize and continue to live in the Matrix even if knowing it is unreal or escape from it to live in the real world. What if there were some scientists who have already found the Matrix exists and escaped from it? If the answer of the P=NP lies on the this fact, then the problem could remain unsolved forever.